St Helena is one of the most remote islands in the world, often referred to as the Secret of the South Atlantic, where it lies 1,200 miles off Namibia and 2,500 miles off Brazil. How we got to visit this incredible island is a story in itself.

A few years ago we were asked by a team of MOD salvage divers if we would supply them with some underwater photography equipment and teach them how to use it. They were, it turns out, heading to St Helena to dive, survey and work on the DarkDale wreck. Having mentioned this connection to the St Helena Tourist Board, a plan was hatched to get us out to complete our story by diving the same wreck ourselves. 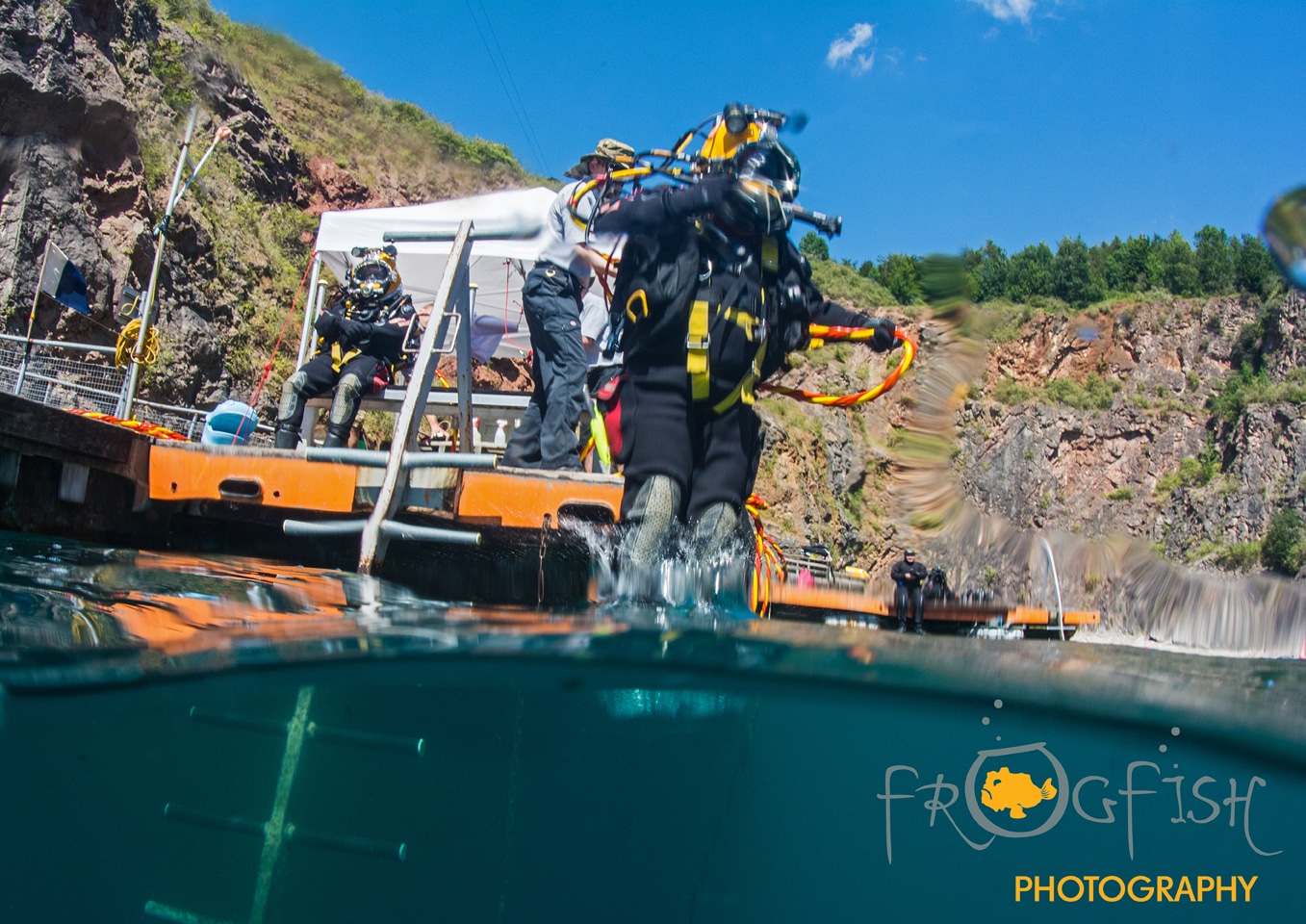 Soon we found ourselves on a flight to Johannesburg in South Africa, and then onwards, via Namibia to St Helena. The runway had only been open for a year and the approach is one that can have the most experienced traveller glancing nervously out the window as the wing tips seem to get impossibly close to the rocks.

The good news for divers is that new flights from Cape Town are being launched later this year, making this a perfect destination to do a dual centre diving trip. And the best time to go is January to March, when the island is visited by large numbers of Whale Sharks.

Maybe it is the remoteness of this island, or perhaps it is because these waters are protected, but the first thing you notice when you put your head underwater the water here is the number of fish. Clouds of the endemic Cunning Fish cover both rocky reefs and wrecks. One of our first dives was on the wreck of the Papanui, sunk in very shallow water in the bay. Craig, from Dive Saint Helena, accompanied us and pointed out bottles and crockery still on the sea bed, even though this wreck has been down for over 100 years! 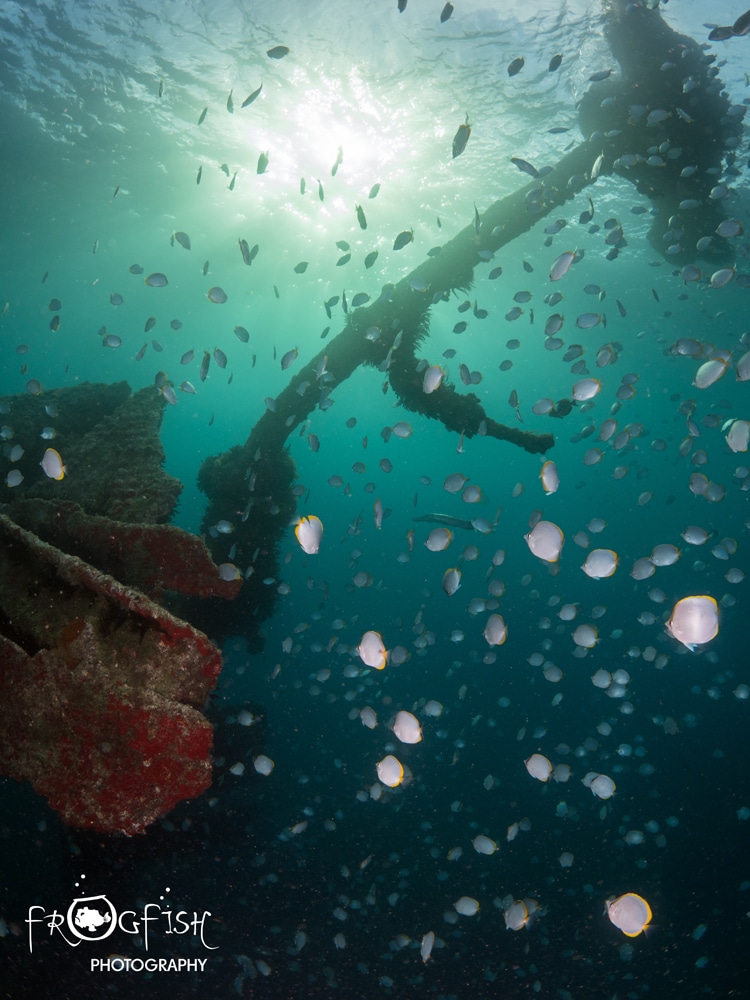 Above water the island is packed with things to do. If you love history, well, St Helena has that in spades, including the final chapter of the story of its most famous resident – Napoleon. St Helena also boasts the oldest terrestrial animal, Jonathan, a tortoise who is 187 years old. The scenery is stunning and the island is covered in trails and walks covering the hills, forests, valleys and coastline. For those who are really fit, there is Jacob’s Ladder. This dizzyingly steep set of steps climbs from Jamestown to the cliff above to Ladder Hill Fort, some 699 steps and 183 meters high. The record to climb the steps is just over 5 minutes! 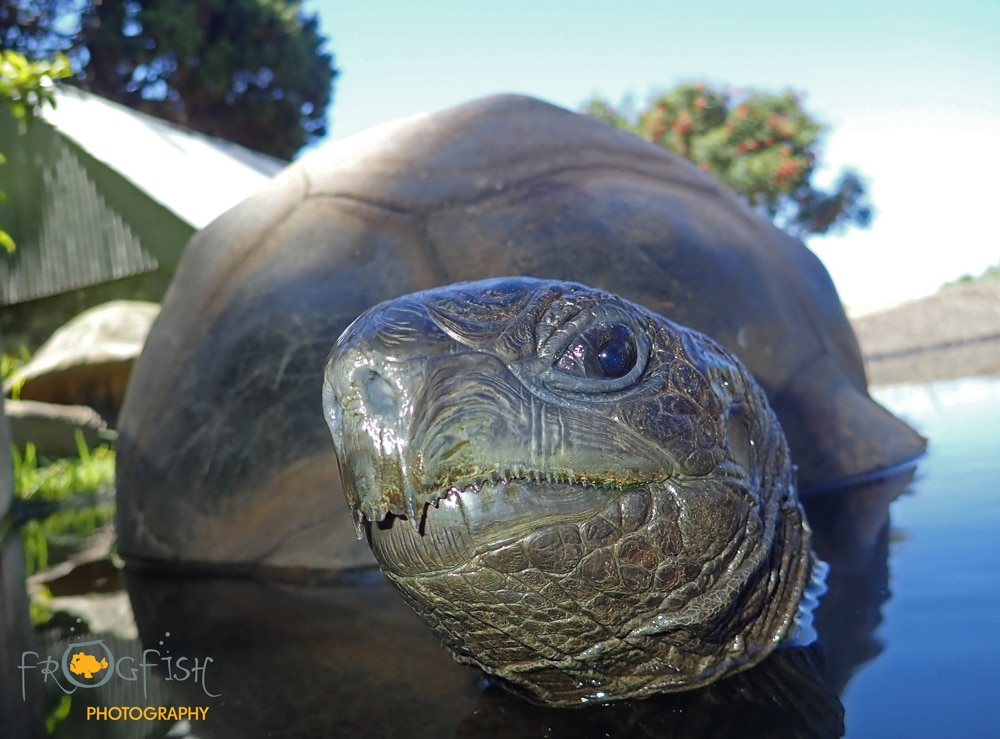 Ancient Tortoises live at the beautiful and historic Plantation House

Want to know more? Have a look at our full feature in the latest issue of Dive Travel Adventures HERE.

Watch out for more blogs about St Helena coming to Scubaverse soon where we will talk about our wreck dives, marine life and reef dives.

For more information about our trip:

The Wining and Diving series sees Nick and Caroline Robertson-Brown embark on a tour to tickle the taste buds as well as to discover amazing dive sites in wine-making regions around the world. Some of the best wines are influenced by sea breezes and a coastal climate, allowing two of Nick and Caroline’s passions to be combined into one epic journey.

**Please note, Nick and Caroline are not encouraging drinking before diving! The two activities are kept well apart on each of these trips.

South Africa’s coastline is wild and rugged and has some of the best marine encounters and diving in the world! It is also home to some superb vineyards and so this is a top destination for Wining & Diving! If you have enough time, then try to fit in several destinations on a tour; take in the Sardine Run, go Great White Shark cage diving, snorkel with Blue and Mako Sharks, try to find Sevengill Sharks in the kelp forest, meet the raggies and oceanic shark species near Aliwal Shoal and make sure you dive with the Cape Fur Seals just down the road from Cape Town. Head north for the stunning reefs of Sodwana Bay and even fit in a land safari too! But make sure you make time to visit some of the top vineyards at Stellenbosch and Constantia too, which are just a stones throw from Cape Town and can be done on a day trip.

Our tour took in the lot and this is an experience to be shared with friends. You have to be lucky with the Sardine Run, but the rewards are great if you are there at the right time, with dolphins, sharks, whales and seabirds all competing for the feast of sardines that migrates up the coast in early summer. It is fast and furious, but can also involve long days out on the boat bobbing and waiting for the action to happen.

Flying into Durban you can often combine Aliwal Shoal to start your Sardine Run trip, to get the chance to dive the famous Cathedral Rock and then drift out into the blue for Blacktip and Tiger Sharks.

Gaansbai is the most famous place for Great White Shark cage diving, although recent years have seen numbers falling away, possibly due to the presence of Orca.

Cape Town offers penguins, Blue and Mako Sharks, Sevengill Cow Sharks, Great Whites and the chance to mess about with Cape Fur Seals, who will seek out divers and play among the kelp fronds for as long as you can stay in the cool water. It is here that you can add a few days visiting vineyards and touring the stunning countryside before you head home.

We would love to go back and spend more time in South Africa, as we did not have time for the Mako Shark snorkeling and would like to try again for the cow sharks too. South Africa has so much to offer it is very hard to fit everything into a single trip! It is a high energy and super-productive trip under the water and a wonderful place to relax with your favourite glass of wine in the evening.

There is nothing quite like seeing an apex predator in the wild and divers are very fortunate to have the privilege to get up close and personal with one of the world’s most striking predators. South Africa is home to a great number of shark species that attract thousands of tourists every year. Great Whites, Tigers and Bull sharks are just some examples of over 100 different shark species living in the oceans around the South African coastline.

With such an array of species, it’s no wonder there are so many research and conservation organizations in the country that do exceptional work. These entities are collecting important data that is showing how important the shark species is, not only the ocean’s survival, but that of mankind too.

So, what’s the big deal, they’re just fish with teeth?

Sharks have an undeserved reputation as being man-eaters. Considering the millions of people that use the ocean everyday whether for recreational or occupational use, as few as 10 people die from shark interactions annually. If they were the man-eaters we made them out to be, that number would be much higher. More people die from accidents with household appliances in one year than people have died from sharks in the last 100 years.

The shark is an important part of the ocean’s ecosystem, but more importantly it’s their role in the survival of the planet we need to be concerned about. With an estimated 100 million sharks being killed every year, ocean ecosystems around the world have been severely destabilized and unbalanced. Sharks help maintain a healthy gene pool by predating on the weakest of their prey, ensuring the strongest survive to continue the species.

If we wiped out the Great White Shark population in South Africa, there would be an abundance of seals, this growing population of seals, now the new apex predator in the area, would very soon consume to a point of extinction many crustaceans and small bait fish resulting a complete collapse of many fishing industries and worse, the collapse of an entire ecosystem.

Education about the importance of sharks and changing people’s perception of sharks are small actions that can make positive change. An organization that has been working hard to educate people about sharks is “Sharklife”.

I recall becoming a Sharklife Instructor in 2008 when the organization had just started offering a range of courses on several of the shark species found in South Africa. Courses were offered on specific sharks and required a number of dives to study the shark’s behavior and unique characteristics. One of the challenges we faced as instructors was guaranteeing shark sittings on training dives. Some sharks are much easier to encounter reliably than others.

We had some interesting dives experimenting with different non-invasive methods of attracting sharks for our students to study. The most noteworthy of these experiments was trying find what would attract Bull Sharks. These elusive predators can be very inquisitive and engaging which made for some exciting learning experiences. 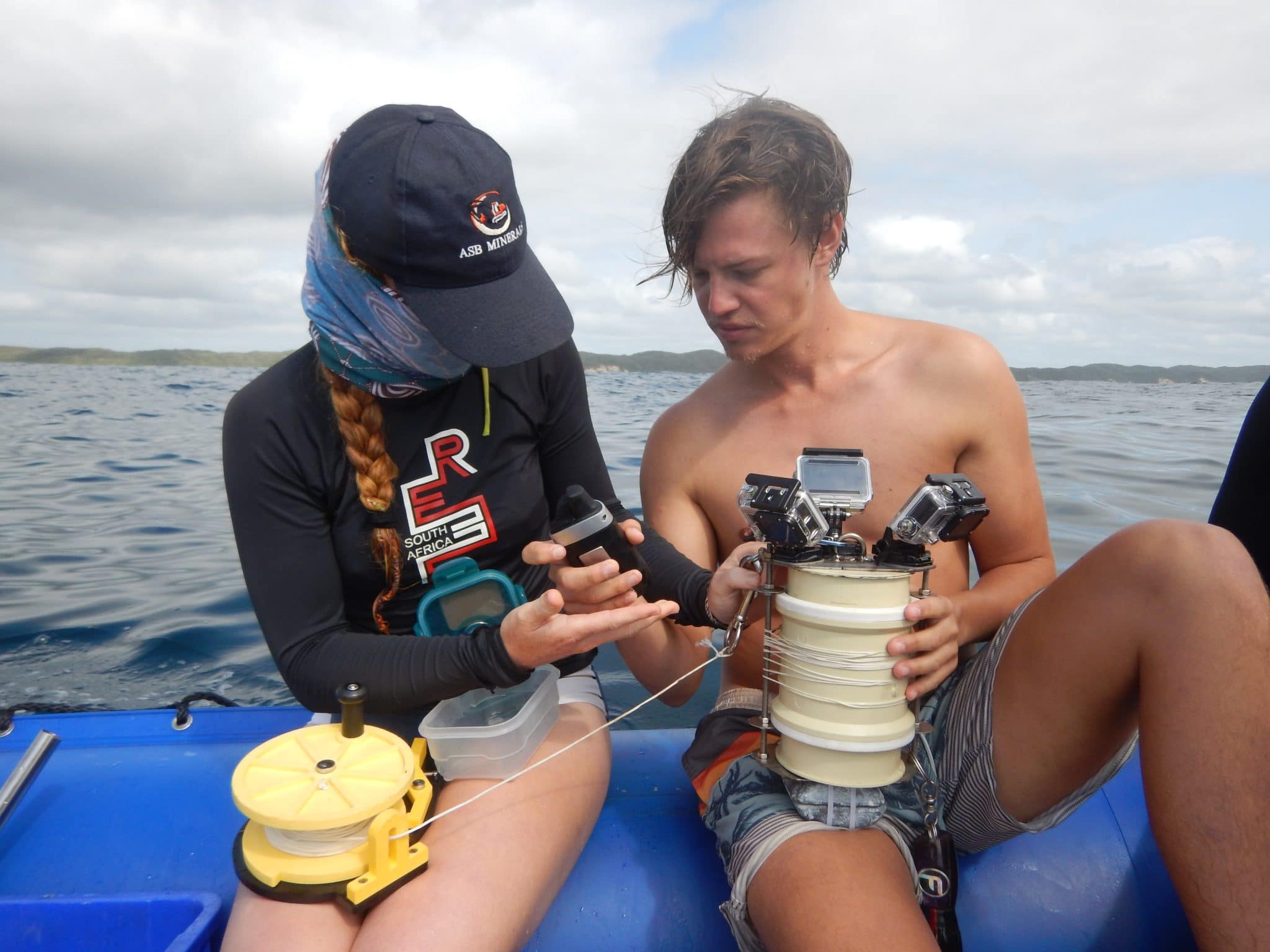 Today Sharklife has a permanent base in Sodwana Bay, South Africa. At the current premises, Grant Smith, Sharklife managing director, oversees a number of research projects and conducts research internships for candidates from all over the world. In addition to the various shark courses on offer, there is a shark museum with some fascinating displays and shop where you can purchase a host of different shark related products.

Through scientific research, education and awareness bring about positive change to the current destructive trends of ocean exploitation.

In line with aim number 2, one of their achievements was the removal of shark nets in the Rocky Bay area in Kwa-Zulu Natal. An initiative that started in 2008 and took years of relentless campaigning resulted in the removal of the shark nets in this Marine Protected Area. The capture of 14 Tiger Sharks on the 18th April 2012 was a catalyst that renewed efforts for the lifting of the nets and on the 30th April 2014 the nets were lifted for the last time.

More information about this campaign can be found here: https://www.sharklife.co.za/index.php/our-projects/completed-projects/shark-net-removal

How can you get involved?

Visit their website, www.sharklife.co.za and sign up for free shark course. You can even adopt a shark and join as a monthly member.

Regardless of the organization you support, something has to be done before it really is too late to turn back and recover. There are hundreds if not thousands of initiatives out there to get involved with or contribute to and I know all of them appreciate the smallest donation of time or money.

Personally, I would hate to never again see the wonder in a diver’s eyes when they interact with a shark for the first time.

All the latest news from the world of scuba diving and marine conservation direct to your inbox. Subscribe to the free Scubaverse email newsletter for news, features, competitions, special offers and more!.

St Helena – The Secret is Out!

Diving below the waves of the Western Cape, South Africa – Long Beach at night (Watch Video)